They’re retired now and live in a small community near Yarmouth, Nova Scotia. They also happen to own two Mazdas: a CX-3 and a CX-9.

On a cold and crisp December morning last year, Claire and Louis headed off in their CX-9 towards New Brunswick to visit with their son and his family. What they didn’t know before heading out that morning was that the weather would take a severe turn for the worst.

It’s a long eight-hour trip to their destination in Fredericton. They made their usual pit stop in Truro for lunch, and then they got back in their vehicle with full bellies and Louis at the wheel.

About an hour into this leg of the journey, the CX-9 fell behind some slow-moving vehicles. With the accumulation of snow, slush and freezing rain, the passing lane was not clear, and drivers like Louis were at the mercy of the cars ahead of him. If they were moving slowly, so would the CX-9.

That is, until the passing lane seemed to clear. That’s when, at Claire’s urging, Louis decided to make a move and pass a transport truck. No sooner had he crossed into the other lane, that the vehicle struck an accumulated pile of slush and ice. Well, with no winter tires and perhaps a bit of an overcorrection by the driver, they lost traction and went off the road, flipping two and a half times, landing on its roof.

Then, ever so slowly, Claire came to realize what had just happened.  She called for Louis. The airbags had deployed so she couldn’t see him just a couple of feet away in the driver’s seat. He called back to her. All this while they are hanging upside down, strapped in tightly by their seatbelts.

Well, it turns out they were both okay. Within moments, multiple passing motorists stopped to provide assistance and call 911. They pulled Louis and Claire out of the vehicle from their upside down position and were all amazed that this 80-year-old gentleman and his 70-something-year-old wife emerged from the wreckage without a scratch. The two ambulances and fire truck that were dispatched left the scene after quickly checking the couple over. An RCMP officer also showed up. She, too, was amazed at their condition and told them that their vehicle absolutely saved their lives. The officer saw that Claire and Louis were safe in the hands of all the good folks gathered round so she obtained only the most basic information from the scene then said that she had to leave. There were four other reported accidents on the highway and not all of them had such a positive outcome. 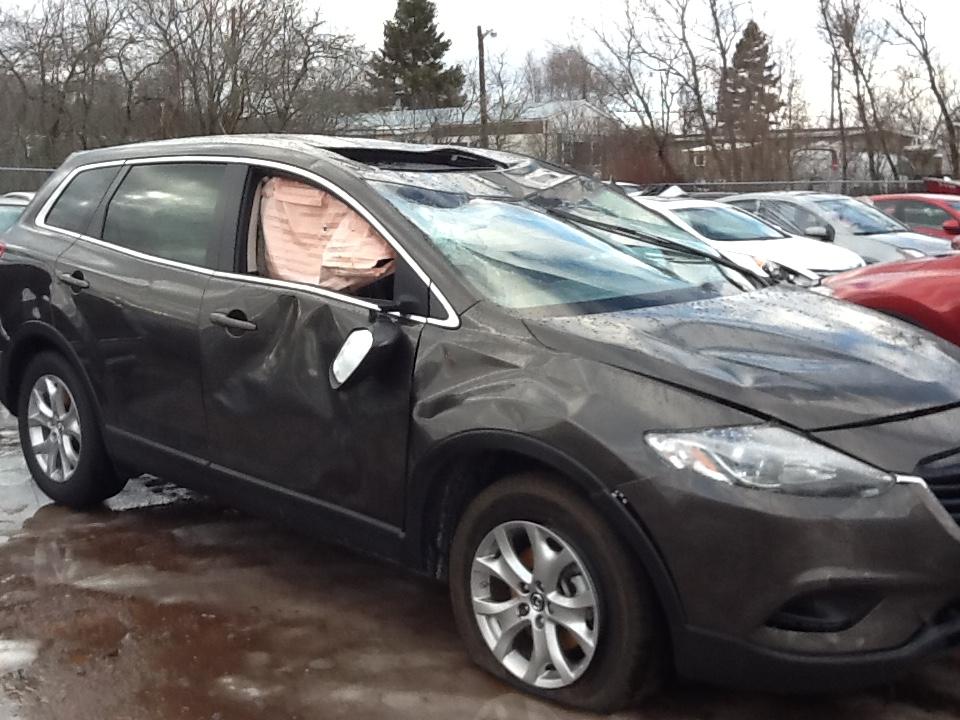 One of the good Samaritans offered to take Claire and Louis back to Truro where the closest car rental place was located. From there, without missing a beat, Claire and Louis hopped into their rental and continued on their way to Fredericton, at a slower clip to say the least.

Their son and his family were amazed at the tale Grandma and Grandpa had to tell once they reached their destination. Grandma Claire showed her granddaughters a tiny rip in her pant leg. She said that it wasn’t from the accident itself. It actually happened when she was being pulled out of the wreckage. Other than that tiny rip, there were no visible signs that an accident had ever even occurred.

Next morning, after Claire took care of business with the insurance company and confirmed that their vehicle was indeed a write-off, she and Louis marched into the Fredericton Mazda location and bought themselves another CX-9 with winter tires this time. They knew, as well as that RCMP officer did, that the vehicle did exactly what it had to do in a crash. It collapsed in all the right ways and the airbags deployed properly. The vehicle’s safety features prevented injury and maybe even saved their lives. There was no question they would purchase another.

So many people who have heard Claire tell the story about the accident respond with a “thank God”, “thank your lucky stars” or “thank goodness you’re okay”. Claire says, “sure, that’s all well and good,” but her retort is always, “thank Mazda.”

How do we know all the details of this accident? My husband Tim and I are not just the owners of the Fredericton dealership that happened to have sold them their vehicles, but Louis and Claire are Tim’s parents. They were on their way to visit us and our daughters when this all unfolded.

Since the accident, Louis and Claire have gotten on with their busy retired lives and continue to make regular trips to spend time with us in Fredericton. They travel in their CX-9 with peace of mind. They’ve always loved the comfort and style of their vehicle. But now, needless to say, they have taken on a whole new appreciation for the CX-9’s safety suite.

We’d be happy to help you find a CX-9, or other highly-rated Mazda vehicle to keep your family safe. Safety is just one of the reasons that we love Mazda.